Okay pals, the head is clear and the kitties are back!!!  We just need some time to get back into some kind of creative pawing so thanks for sticking with us!

My mom is feeling pretty good.  She's doing really good with the therapy.  She's scheduled to go home next Friday and that's purr-fect news!  I'm sorry for not updating on the 1st but understand something, I've been under a tremendous amount of stress caused by my siblings especially a brother who lives close by.  Unfortunately, I started smoking again too which SUCKS but I digress.  Let me paw on...

Fuzzy and the gang aren't going anywhere.  Consider us on a hiatus.  If all goes well, next weekend I want to paw back on the 14th.  I want to thank everybody for their good wishes too- I appreciate it!

One more thing- for reference- cats are getting a lot of heckling by a lot of online commentary that idiot Tim Pool comes to mind- I encourage ANYONE if you listen to a podcast and here people making fun of cats are mocking Russian Blues to speak out.  There are a lot of nutty people out there who live their lives following some of these people and if these people keep it up- they're going to cause a lof of whack-jobs to abuse a lot of cats out there.

In the meantime, have  a great weekend and we'll meow with you soon.

Posted by Smokey_the cat at 2:43 AM No comments:

Okay, pals, my mom is feeling pretty good.  She had surgery Saturday and is headed to rehab today. I am aiming to come back on March 1st.  I need to see how she's settled and I'm in a major creative funk.  This date could change but the blog isn't ending and the kitties will be back.

Unfortunately, pals, I have a family emergency here.  My poor mom fell and broke her hip.  I need to take a few days off of this and I hope to be back on Tuesday.

Surprisingly, his dad wasn’t ticked-off, he was amused and if you think about it- that would be kind of funny, if you were a jaguar- being told off by Toni-Chub!  “Mr. Spots,” he roared with enthusiastic big cat laughter.  “That’s good,” he added.  Suddenly, he turned to look at Hank.  “Hey, is that Hank the hippo?  How did you find him?”

Fuzzy was startled.  Sammy’s dad knew Hank?  How in the hell was that paws-ible?  Well, never mind about that, they can figure that out later.  “Hank’s having one of his naps,” Fuzzy meowed to Sammy’s dad.  “We came from Pennsylvania after all.”

“That’s where the Steelers are from, right?”  he asked.

Fuzzy was impressed with Sammy’s dad.  Toni, in shock, said, “Are you really a Steeler fan??”  she asked Sammy’s dad.  “That’s really pawsome.”

“Love Big Ben,” he growled out.

Fuzzy and Toni’s whiskers were up with interest.  “Why?”  Sammy asked.

Sammy’s dad was just shaking his head.  “I think your poor mom might be dead, kid.”

Posted by Smokey_the cat at 3:38 PM No comments: 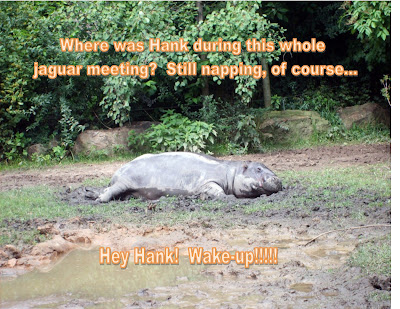 Sammy had a dad?  What in the meow was up with this?  Why didn’t he mention it?  Did he know where Sammy’s mom was?  Paw-viously, the questions were spinning.

Fuzzy and Toni pawed towards them cautiously.  Both were ready to paw off at any second.  Sammy understood the reluctance.  “It’s okay, pals.  I’m not lying this is my dad.”

“What’s up kitties?”  Sammy’s dad asked.  Fuzzy noted that he was sitting there really calmly, like he was some kind of dude cat ready to hang for the evening.

“This is Fuzzy,” Sammy said pointing to Fuzzy, “and that’s Toni,” he nodded towards the Chub.  “They’re my new pals from America.”

Sammy’s dad looked really confused.  “Tony?”  he asked, looking at the Chub.  “You don’t look like a boy cat.”

Toni’s eyes narrowed.  “That’s Toni with an i,” she meowed out with, Fuzzy noted a little bit of a growl mixed in.  “Don’t you make fun of my name Mr. Spots.”

Oh there we go, Toni was picking a fight with a jaguar.  Cute, Toni, really cute.

Over the Rainbow Bridge 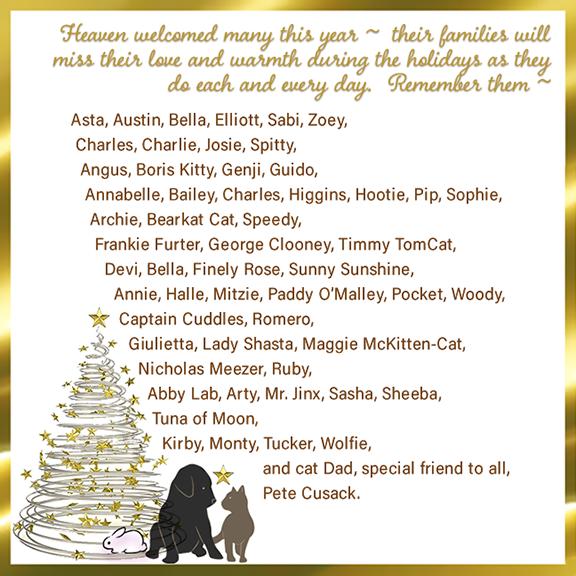