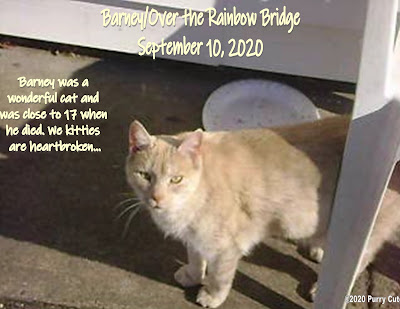 Unfortunately, I've had a lot of rotten luck when it comes to cats in the last couple of years.  I'll always wonder about Smokey, Casey, Sammie and Corey to this day.  My instincts tell me that it's possible someone did something to them.  With that being said, Barney, thank god lived to a nice old age.  I was hoping he'd make it until Oct. 1 which would've been his anniversary day but he died very peacefully in an empty pipe not far from my house.  This was a wonderful cat, who was taken to the local shelter by two bitches in 2007 and I managed to get him before the shelter even opened.  I guessed that he was about 3 years old at the time but I received no correct information from the bitch who wanted to get rid of him because she insisted he was a stray.  (Funny thing was she called him Oliver and had a carrier for him but hey whatever).  Barney, originally called Buddy, lived with my elderly aunt for awhile but within months he was with me.  One of the best memories I have of Barney is when Casey, who was literally abandoned the day after I got Barney literally would go into my aunt's house through the cellar to get him out to wrestle LOL... Anyway, I ended up changing his name to Barney because it suited him.  He was, like I said, a wonderful cat and he will be missed.
The story will be back Monday.
Posted by Smokey_the cat at 4:02 PM