The kitties looked at each other and Fuzzy just stared at the big hippo.  “Aare you kidding me?”  Fuzzy asked.  “What do you mean a rare herb?”

The hippo looked really grave and a tad sad.  “Hank has a weird, tropical disease that makes his stomach hurt and his bones brittle.”

The hippo looked annoyed by that question.  “How would I know?”  he asked.  “I’m just telling you what he has.”

Paws couldn’t understand this.   “What are you?  Some kind of doctor?”

Just Think About It 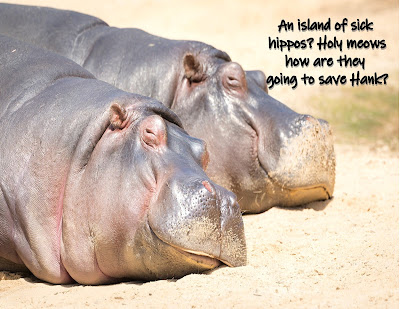 The kitties were shocked, horrified and flat-out stunned.  What did that mean?  Hank was what?  Almost dead?  Are you meowing kidding me?  What was the real story here?

The hippo saw they all looked really confused.  “He’s not dead,” he insisted.  “He’s really sick though,” he added.  “He’s over in the field,” he lifted his leg to motion to a field in the west.

“What are you?”  Sammie asked.  “Are you some kind of hippo doctor?”

“More or less,” the hippo answered.  “I run the island and there are all kinds of sick hippos here.”

Fuzzy couldn’t believe it.  “Are you serious?”  she asked.

The hippo glared at Fuzzy.  “I wouldn’t lie, cat,” he said.  “The thing you should worry about is Hank.  He has a really bad illness.”

“What does that mean?”  Toni asked.

“He has a really weird tropical illness,” he said.

“That’s not really important,” said the hippo.  “He needs an important herb to survive and if he doesn’t get it- he’ll die!”

Fuzzy was shaking.  Do you blame the kid?  Seriously, do you blame her?  Who in the meow wanted a walrus in their face.  Anyway, Fuzzy knew that she had to remain calm bepaws- well she was the big sister and for meowing out loud she had to make her late stepdad, Casey, proud.  She knew that she couldn’t show any fear.

“We’re looking for our friend,” Fuzzy meow-nounced, regaining that cool, confident position.  “We were bought here bepaws this dude told us that our friend was sick, and we had to get to him fast.”  Fuzzy wasn’t sure why she left out the walrus, it just seemed like a good idea.  Besides that, the hippo seemed like he was backing off somewhat.

“You’re here for Hank, right?”  the hippos asked looking serious.  “You’re the cats that hang out with Hank.”

Fuzzy didn’t like this and neither did any of the other cats.  Tigger and Mike even had their whiskers stuck straight out at attention.  “What happened?”  Fuzzy asked.  “Where’s Hank?  Is he dead?”

“Hank better not be dead!”  yowled Toni getting all huffy and chub-like.

The big hippo eyed the kitties with a combination of surprise and skepticism.  Do you blame the dude really?  Who would’ve thought that cats would like hanging out with a hippo?  “Hank’s not dead,” he said, “but he’s gonna be.” 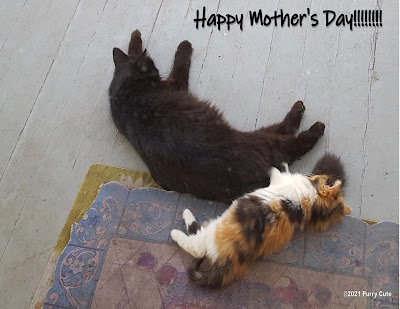 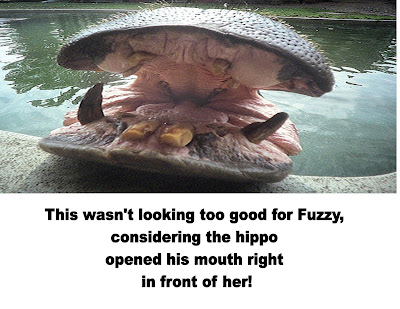 Posted by Smokey_the cat at 4:24 PM No comments:

Well, what was it?

Was it an earthquake?

No, it was a hippo.  A hippo?  Yeah, a huge hippo was walking towards them, making the ground shake.

Wait a meow-minute.  Was it Hank?

No, it was the biggest hippo that the kitties had ever seen.  Fuzzy’s eyes were literally bulging at the size while the other kitties, hid behind Paws which wasn’t the least bit surprising.  The dude was scary.

The hippo looked down at the kitties with what Fuzz thought was contempt.  He wasn’t pleased to see them at all and looked like he could do one of those hippo snort things at any second.  He lowered his head to look directly at Fuzzy which made her shrink back a little.  “Well,” he said, “what are you doing here?”